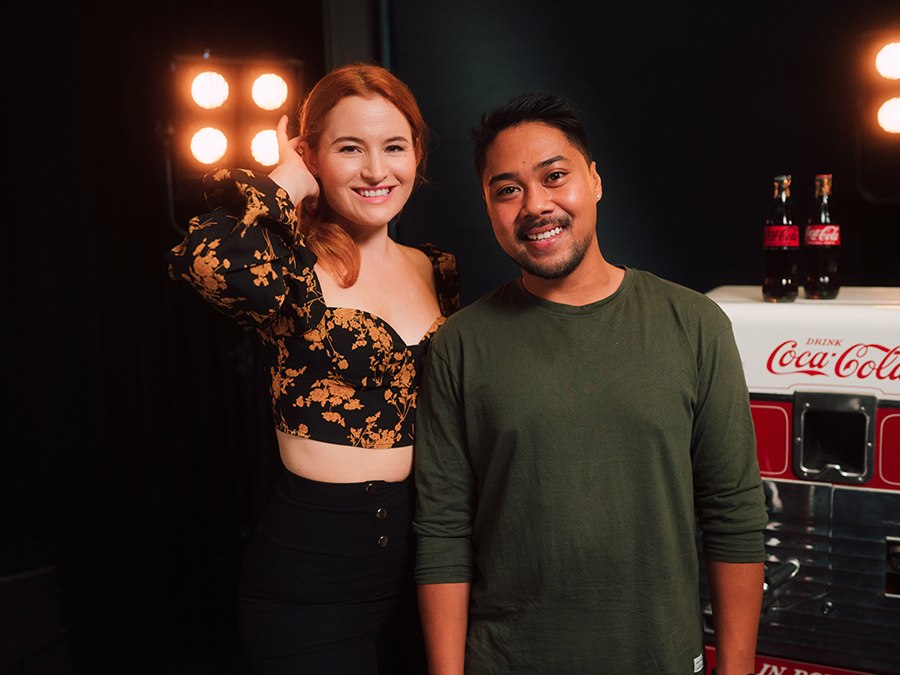 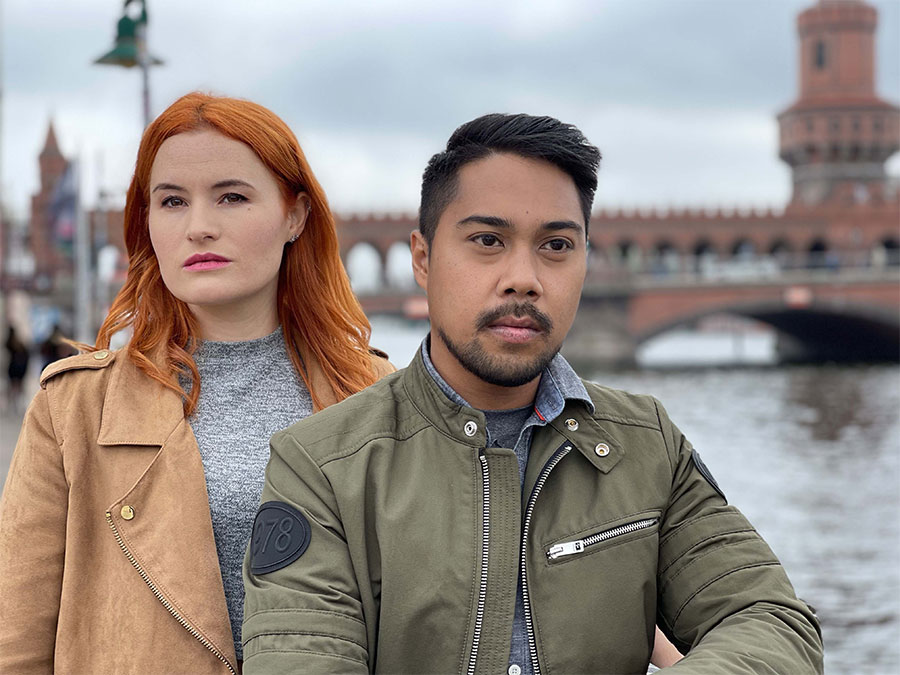 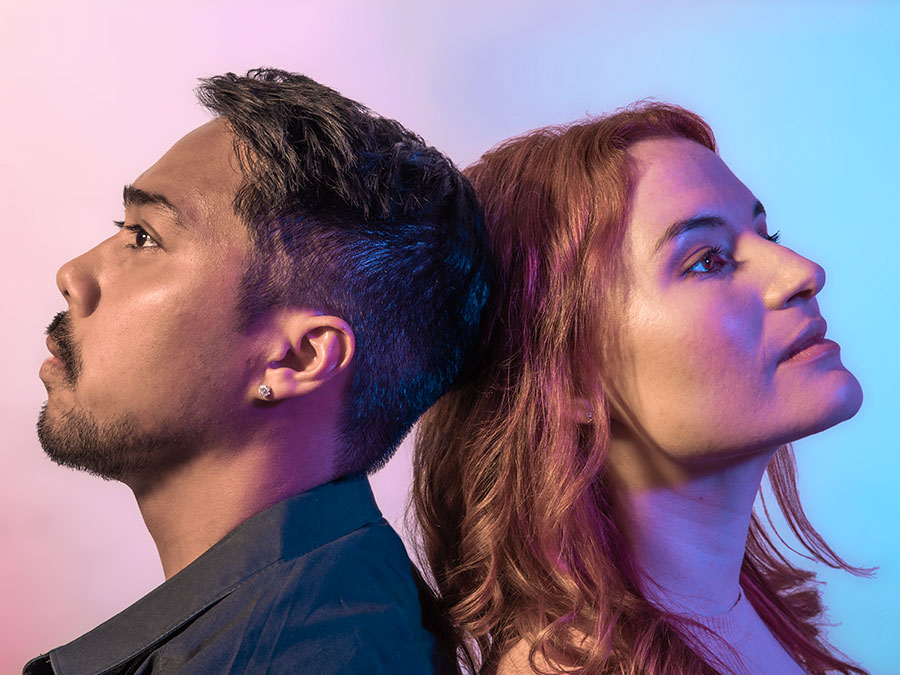 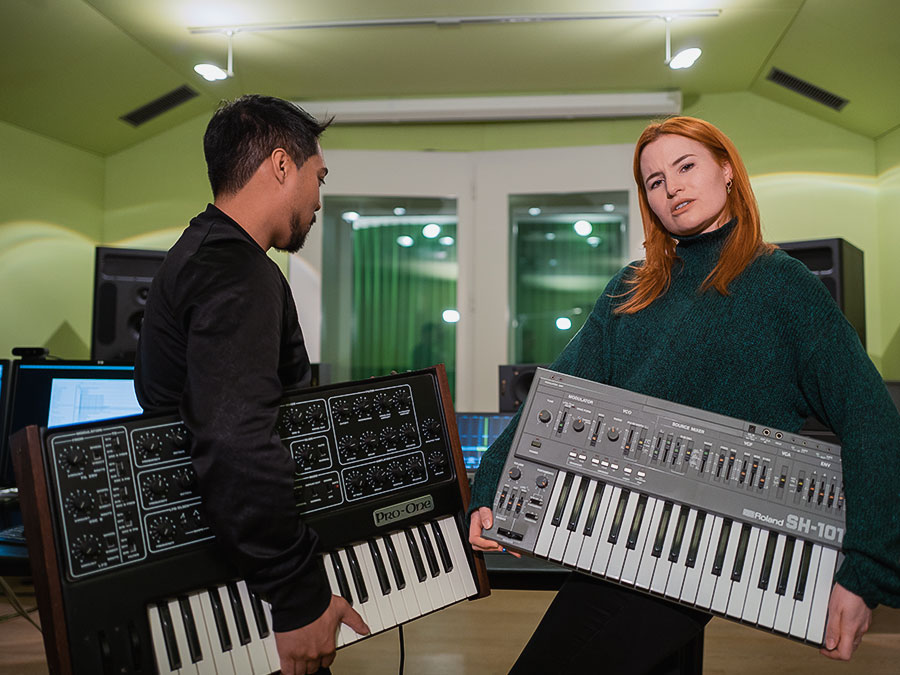 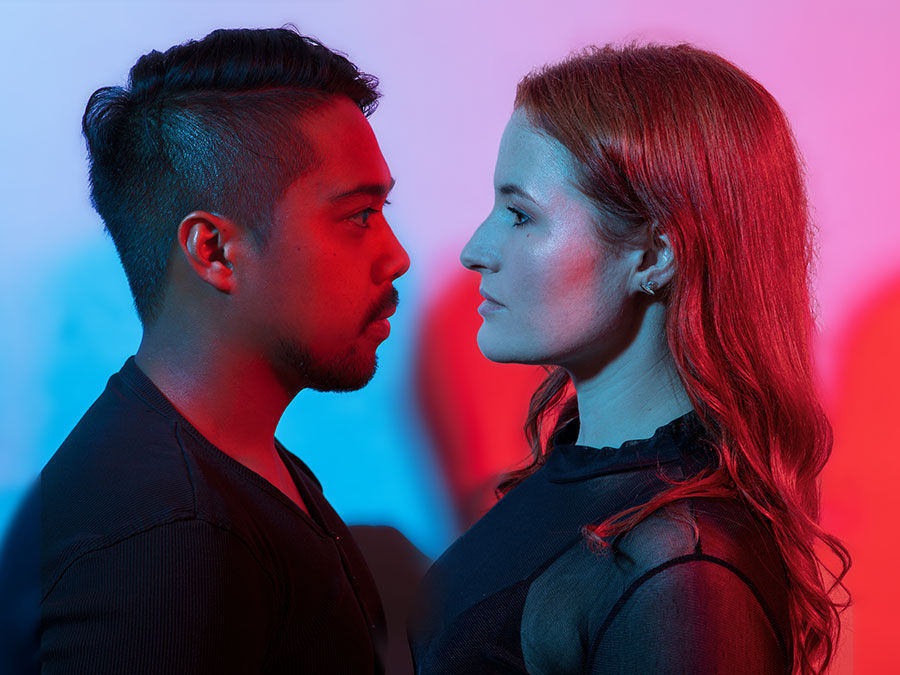 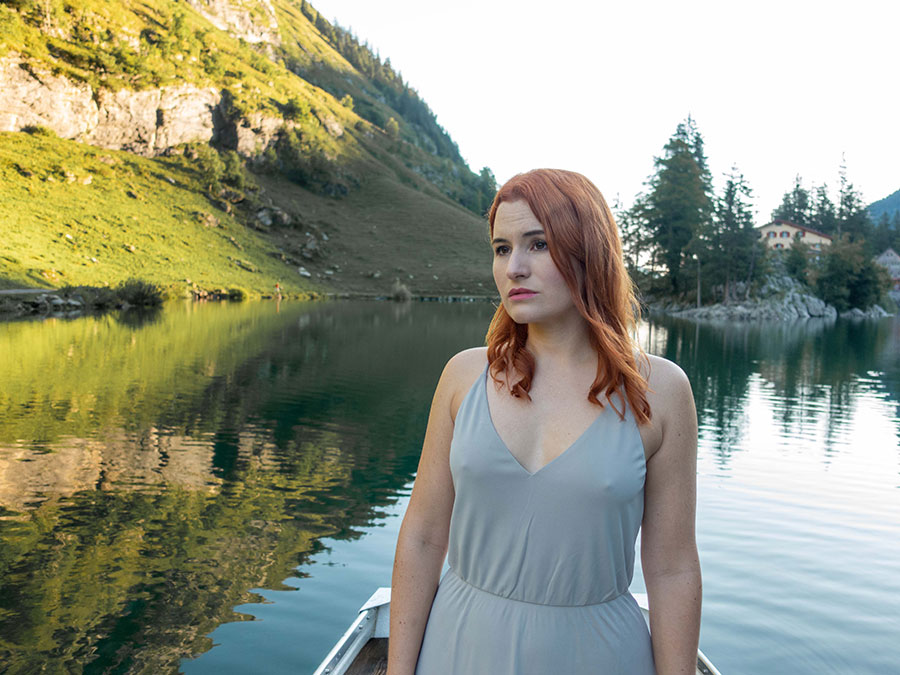 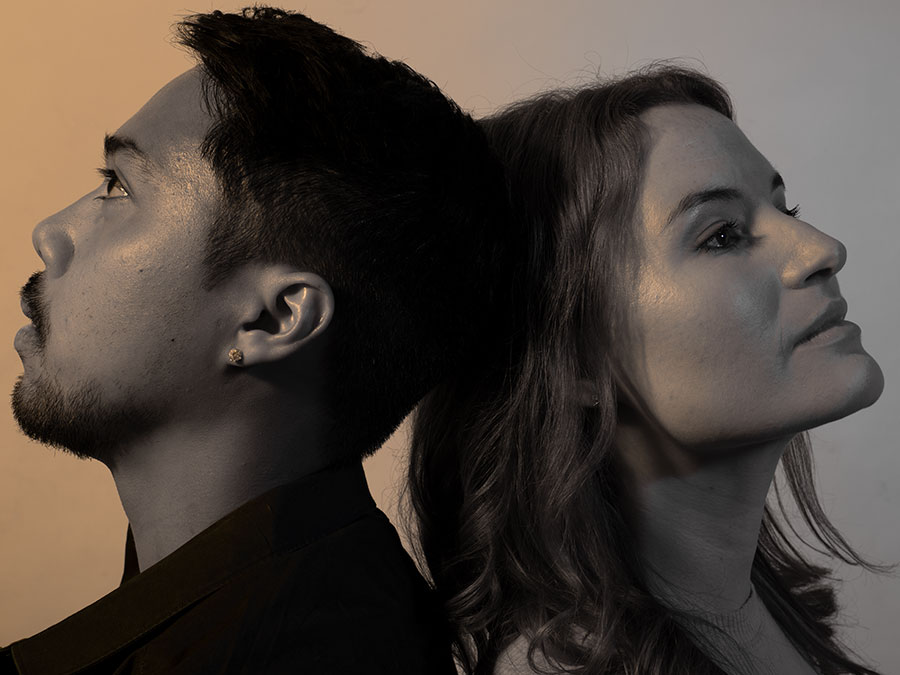 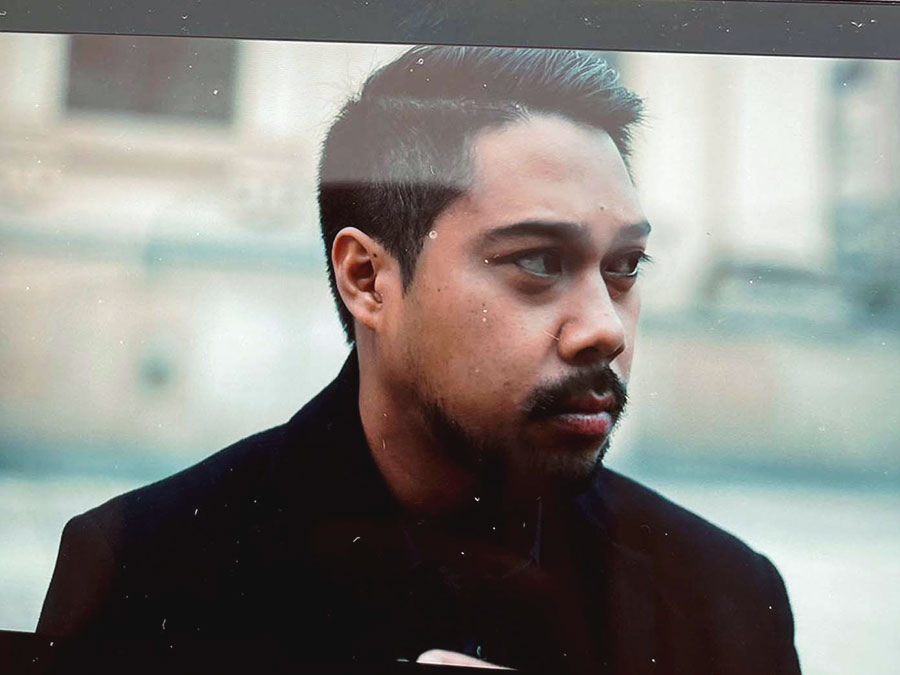 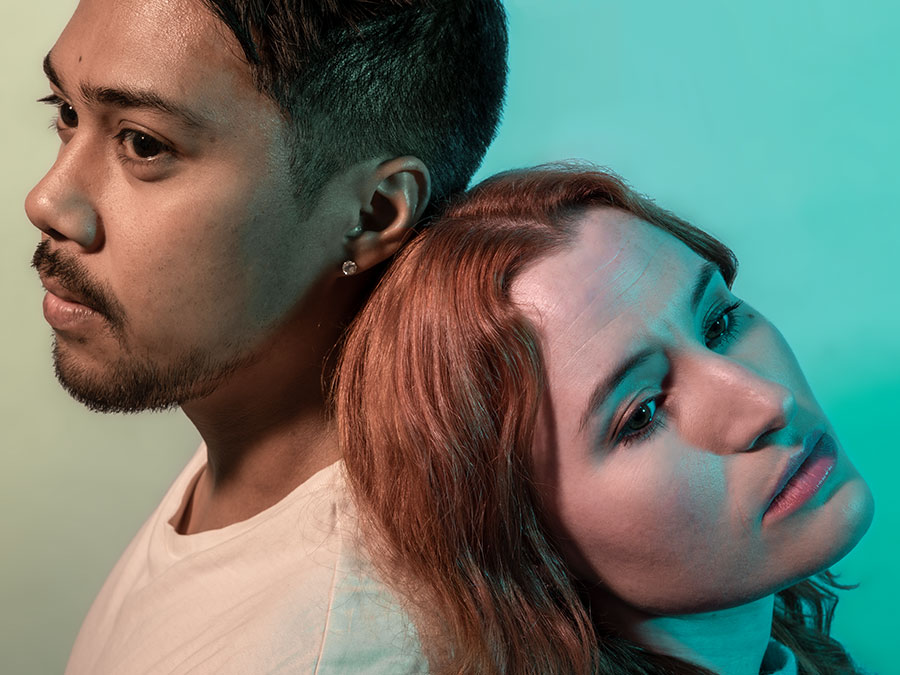 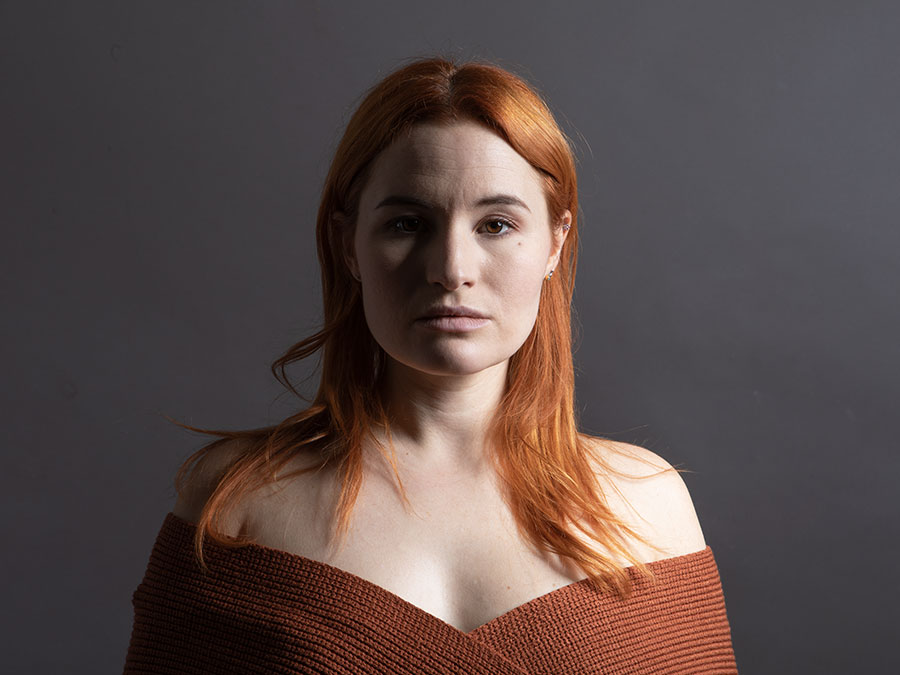 Rainbow Trip
Their latest music comes in a dreamy vibe.

Zurich, November 16, 2022: ECHOTYPES present their new single with ambient guitars, delicate vocals, and a light-feel groove. Jeffrey's style remains distinctive: his warm voice and the slightly nostalgic sounds take the listener to another sphere - true to the sung line "Take me on a rainbow trip all night".

Jeffrey wrote the words on a starry night, inspired by the twinkling of the stars and endless space. On this track, he describes his feelings of affection and trust. His tender singing in the verse is cleverly combined with rhythmic delays, as the chorus stands out with the beautiful guitar melody giving the song its cozy and dreamy vibe.

ECHOTYPES' homage to love.
‍Noelle captivates in ‘I Found You’ with her honesty.

Zurich, September 02, 2022: It was May 2020 - the whole world stood still. Everything was cancelled, no concerts, no rehearsals. Noelle, also isolated, spent a lot of time in her room. When Jeffrey sent her a demo track, she was roused from her lethargy and finished the lyrics to 'I Found You' the same day.

She recorded the demo vocals in her small bedroom – unaware that these takes would end up in the final version of the song. For Jeffrey, it was a no-brainer: that performance was on point. Honest and straightforward.

But the song is by no means a sad ballad: the synthpop track conveys love and fulfillment with the tender, intimate and pure vocals of Noelle. The catchy melodies and song lyrics deliver a plain and simple message: "Live Your Life!".

Release date of their newest single is September 9th, 2022.

Zurich, June 29, 2022: Warming rays of sunshine, walks on the beach and mild summer nights with a drink in hand - That's what ease and freedom feel like. ECHOTYPES’ ninth single 'Open Waters' is dedicated to that motto. Noelle with her lighthearted voice sets a holiday mood: To just let go and enjoy the moment, shake off all worries and immerse oneself in an own world.

The wide ocean is reflected in this piece through nostalgic guitar pads. The bubbling sounds and floating synths are reminiscent of the '90s, thus turn this dance track into an ageless feel-good song.

New Release: Lost in the cosmopolitan cities of the world.
In the latest song, Jeffrey remembers his time in Berlin and Manila.

Zurich, May 9, 2022: Smashing Drums, rhythm guitars and alarming sounds: The newtrack by ECHOTYPES is all about the fast-paced and urban metropolises, where Jeffrey spent his early twenties. The overwhelming experience inspired him to write the first line of the song: ‘Lost In The City’.

At the tender age of 20, and in pursuit of his dreams and love for music, Jeffrey moved from his sheltered home in Appenzell to the fancy and noisy metropolis of Berlin. Entirely on his own and barely over a first culture shock, his adventure soon drew him to Manila, the capital of the Philippines. Although his original roots are from there, he was overwhelmed by its contrasting culture and way of life: there were instances where hefelt alone, disoriented and to top it all, he lost his heart to a local woman. He recorded the demo track in his studio apartment - Jeffrey remembers it clearly: "It feltlike 35° in this small room, and I couldn't turn off the noisy air conditioner while I was recording my vocals. I’ll never forget that session, as I sat there soaking wet after that.”
‍
The result is an energetic, groovy song: pure Pop and R&B with catchy melodies and rhythmically phrased verses. The track is taken to the extreme in the bridge part, when Noelle comes with a breathy, spoken voice - as the saying goes: "more drama baby!". ECHOTYPES’ newest track will be available on May 20, 2022.

Zurich, April 1, 2022: Being in the moment: falling in love amidst an intoxicating summer night. Letting go without having to worry about tomorrow. This is what ECHOTYPES is bringing into their new song called “Kisses and Smoke.”

Organic sounds and strumming guitars bring up the feeling of being free and staying out in nature. Noelle’s voice, pleasantly warm and calm, carries the song with ease. She lives in a dreamscape where is living in the moment and simply forgetting the world behind her. When dawn breaks, that rush is over but the memories remain.

In contrast to ECHOTYPES’ previous songs, their latest track takes us into a new direction. Keeping the cinematic flair, Kisses And Smoke uses less electronic and more natural instruments, thus the sound has a more "indie" vibe.

Zurich, February 25th, 2022: It all started with the legendary Pro-One synthesizer. When Jeffrey first walked into Leoš’ studio, he got his hands on an original from the ‘80s. This synthesizer, which Leoš got when he was 15, was the cornerstone of the song Ordinary Lovin’.

Jeffrey created the distinctive bassline while trying out the analogue instrument. The hook and the first parts of the verse were soon written as Floren Redzepi joined as co-author. Noelle rounded it off by contributing the second verse to the duet. The song is about being stuck in a relationship rut: After all the sparks of falling in love comes uncertainty and doubt – a rollercoaster of emotions.
‍
The track delivers a mixture of spheric synths, ‘80s-inspired drum machines and urban loops. The producer team of 'Ordinary Lovin’' describe it as spacey and organic.

Zurich, January 3rd, 2022: ECHOTYPES’ fifth single called “Paper Thin” is a very personal song about Noelle's experiences with melancholy and the joy of life, that drives her to get up again relentlessly despite desperation.
‍‍
“My skin is paper thin ...” is how Noelle describes the moment when you can no longer protect yourself. Everything is overwhelming and the shame of the inability to act creates a void that seems insurmountable. But “Paper Thin” is not about desolation, but about hope and an indestructible will to live. “And I will get up and thrive ...”, this mantra shines through the whole song, like the light at the end of the tunnel.

A deep pounding pulse runs through the whole song and makes the interplay between verse and chorus sound like a dance with your own darkness – just before the abyss, hope grabs your hand and whirls you back into life. A gentle piano and wistful sounds underline the melancholy while the industrial-style percussion keep up the tension, and the urban beats of Leoš and Jeffrey drive this energetic track forward.

A strong song with a strong message.

Zurich, November 3rd, 2021: With their new song “Apologies” coming out November 19th, ECHOTYPES opens a new chapter in their album. Contrary to the song’s title, the track is upbeat and feel-good about reconciliation and gratitude.
‍
The song opens to piano music and a crackling fireplace in a cozy living room. But the warm atmosphere is ruined by their troubled neighbours: an arguing couple. The track changes to a soulful, funky beat and with a touch of Motown. Jeffrey, lead singer of this song, talks about the little arguments and misunderstandings that occur in every relationship. He apologizes for his missteps in the soothing chorus.

Fuzz guitars and a groovy bassline form the core of this production. This is especially pronounced during the bridge. Drawing from many traditions in music, “Apologies” has sounds stretching from ’80s elements through the ‘90s and even with today’s trends. Prior to “Apologies,” ECHOTYPES previously released “Driving Off,” “Fallin’,” and “Alpha.” Many of the themes from these songs revolve around departure and dissatisfaction, as well as doubt and hope.

Their latest single, “Apologies” in their album “relations,” however, reveals a new chapter: recognition and reconciliation.

Zurich, 13rd of October 2021: After Driving Off and Fallin’, ECHOTYPES releases their third single Alpha from their concept album “relations” on the 22nd of October. Noelle Bobst, Jeffrey Rulloda and Leoš Gerteis from NJP Music deliver a track right when the cold, dark side of autumn starts.

Alpha explores the inner conflict between good and bad, the light and dark sides of life. The song’s intro is mysterious, packed with sound design, followed by a distinct synth melody, taking the listener straight into mystical spheres. Jeffrey brings out the contrast with his sensitive vocals, together with Noelle's voice cleverly woven into the sound. The voices support feelings of division, creating an almost eerie atmosphere. Driven by modern beats with trap elements and rhythmically phrased pop vocals, Alpha reaches its climax in the break with heavy guitar riffs, played by Henning Frenzel. The final part develops into a chase that is literally conjured up with “Run, run, you better run” in the lyrics.

With this third song, ECHOTYPES showcases another musical feature where we discover something new, everytime we hit play. Every song in “relations” is a journey leading to unexpected musical and emotional destinations.

Zurich, 22 September 2021: ECHOTYPES will release their first two singles from their debut album “relations” on October 1st, 2021. The three members of the band – Noelle Bobst, Jeffrey Rulloda and Leoš Gerteis – have come up with new, crisp sound to start off autumn.
‍
Driving Off is a dynamic, up-tempo song that tells a story of escape from an unpleasant place and an unsatisfying time. Jeffrey’s voice, intimate and at times desperate, evokes the urge to break out and set off. Fitting that the music video was shot in the bustling, fast-paced and cosmopolitan city of Berlin. In Fallin’, Noelle Bobst sings of a broken heart and fear of opening up again. Her vulnerable and touching voice is underlined with epic orchestral strings and a 6/8 urban beat. Fallin’s music video was shot in breathtaking Seealpsee, Switzerland, with picturesque and mystic scenes to illustrate a journey of emotions.
‍
With this double release, ECHOTYPES is showcasing the diversity and range of their sound. Their new songs will be available on all common streaming platforms and www.echotypes.com.